You GUYS. I made us buffalo cauliflower soup to warm our soul. 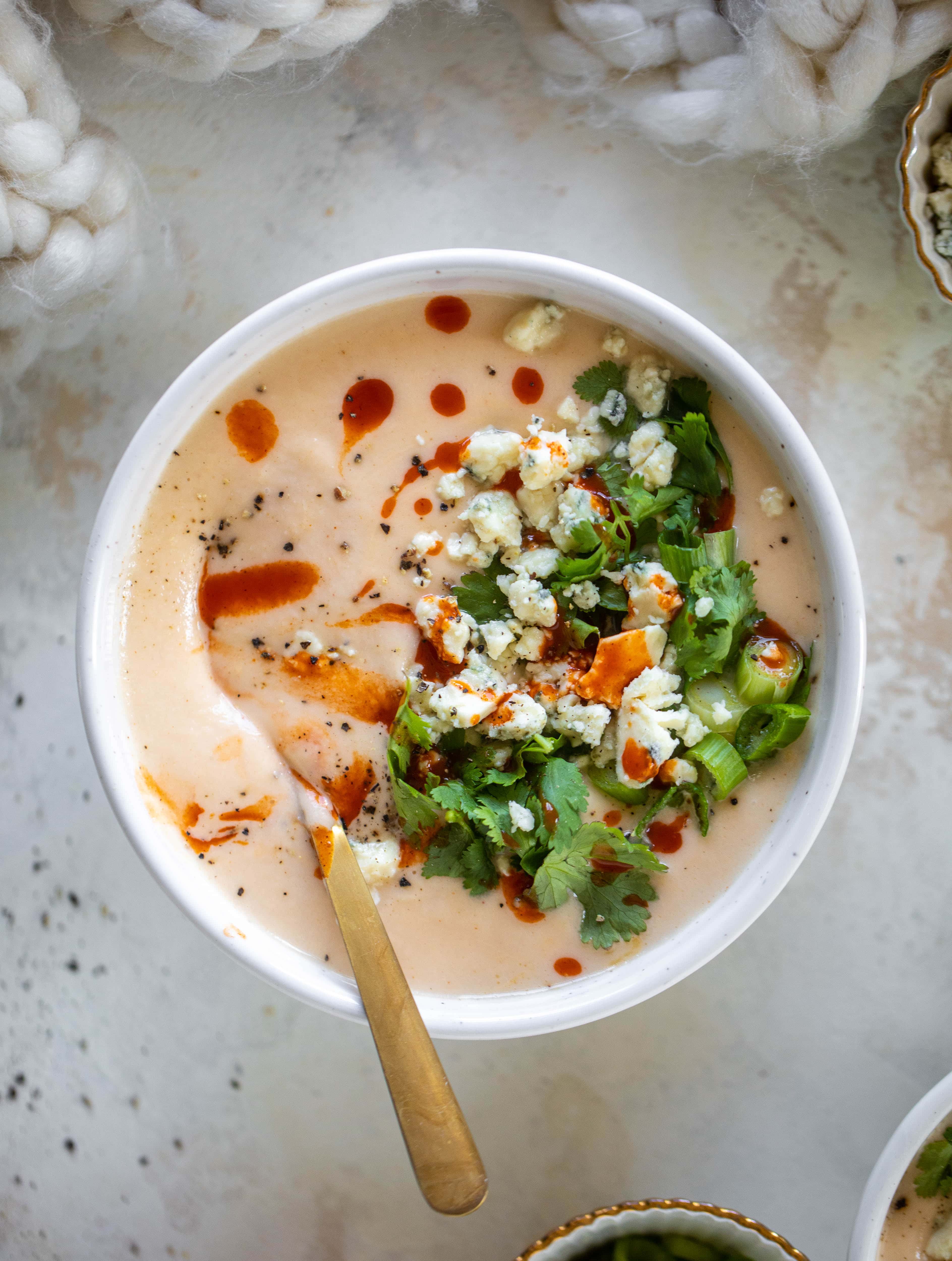 I’m back with more cauliflower and more buffalo-wing inspired cauliflower. Forgive me? Remember years ago when I first made this cauliflower soup? It was SO incredible and one of my first forays into loving cauliflower, especially in a way other than roasted.

That cauliflower soup has always reminded me of potato soup because it is so creamy and decadent – without cheese! That’s always a big one for me.

No cheese?! Should I even taste it?

Well I can’t say that this doesn’t have cheese. It does have a litttttle bit of cheese, but only because I whole-heartedly believe that a buffalo-wing inspired dish should have some cheddar. Sure, I know that actual wings don’t have cheese and cheddar, but when it comes to buffalo chicken pizza or anything else that I try to “buffalo,” a bit of cheddar is a must.

Unless we’re talking about this cauliflower. I use smoked blue cheese there, soooo… just don’t leave out the cheese. Moral of the story. Now here’s the other thing. I have this REALLY OLD recipe on the site for buffalo chicken soup. Many of you are die hard fans over the buffalo chicken soup – like you still tell me how much you love that recipe. Not only is it a good recipe, but it’s pretty darn quick too. 30 minutes or less.

The photos are terrible, but hey, you win some, you lose some. Actually, back in 2010 they were probably omgthebest photos I had ever taken!

p.s. the little baguettes on top of that soup take it over the top. It’s embarrassingly easy and simple but if you love buffalo chicken stuff and soup, you’ll be into it. That is all where the inspiration for this recipe came from. Actually, I thought of a soup with whole roasted cauliflower florets in it, sort of like how the chicken pieces are in my original soup. Then I determined that would be disgusting and remembered that I had the creamiest, dreamiest cauliflower soup recipe that I love so much.

And that doing some sort of combination of the two would be awesome.

I was right! This is silky and smooth and a little spicy and tangy. You melt a bit of cheese into the soup too. But obviously, the real winner here is the toppings – tons of chives and scallions and blue cheese, all my must-haves for anything buffalo-wing inspired. And if I’m being honest, I really wanted something crunchy on top. I think you could do a baguette slice or big, crunchy crouton, but I liked the vibe of no bread here, so I skipped it. What you can (and should?) probably do is garnish it with diced celery. But since I believe celery is born from the depths of hell, I skipped that part.

A bowl of this is SO good. Super comforting and warming, silky and smooth. It’s amazing in shooter form too. And slightly orange, obviously, so it’s the perfect October soup. This buffalo cauliflower soup is creamy and decadent and silky smooth! Made with cheddar, wing sauce, blue cheese and all the fixins! 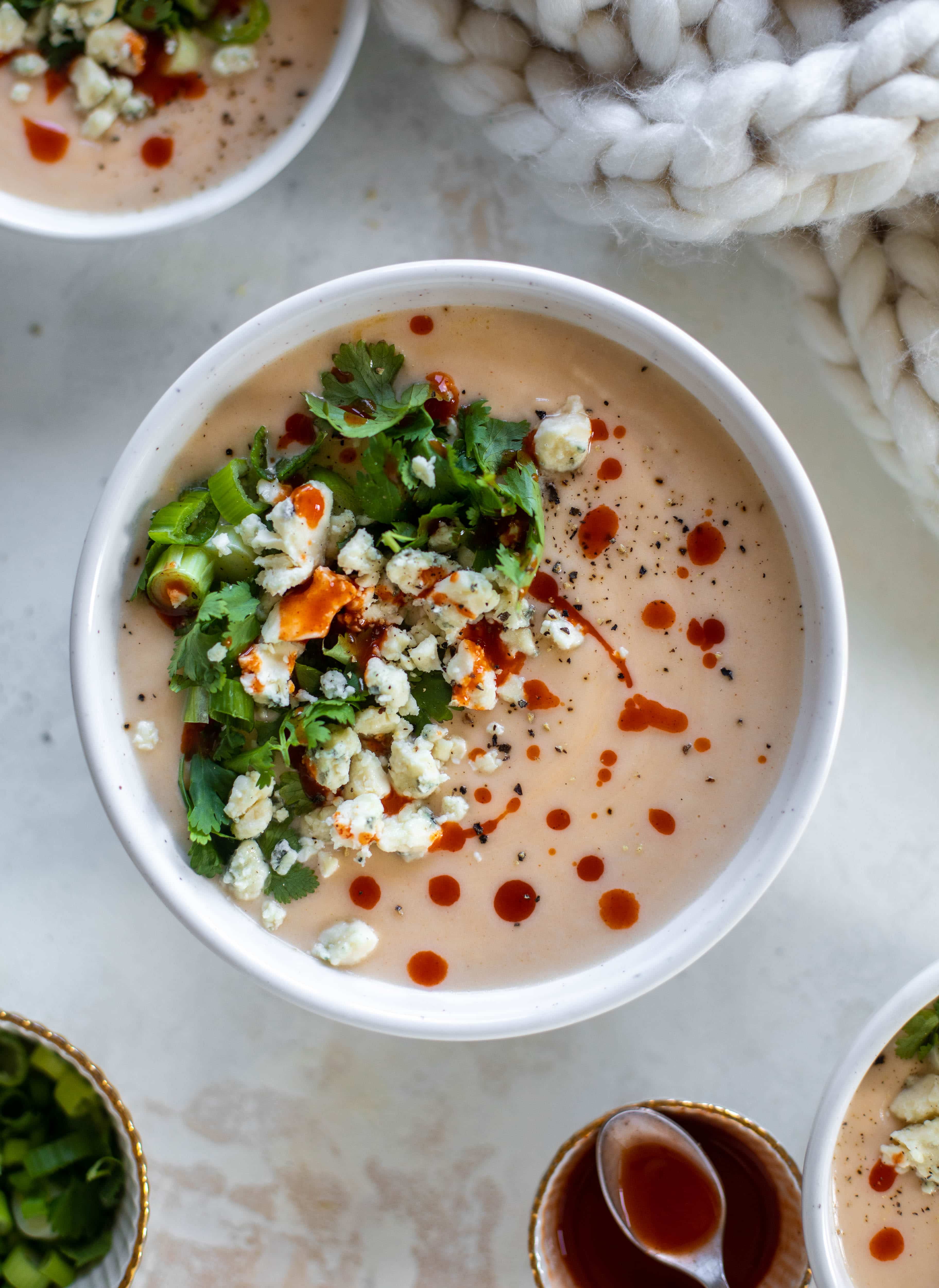 Seriously melts in your mouth!