Mother’s Day is around the corner and if Thomas doesn’t make us this Caramelized French Toast with a Berry Compote, WE ARE GOING TO HAVE AN ISSUE. Poppy (although she doesn’t eat solid food yet) is in 100% agreement!

Imagine this… French Toast flavored with vanilla and nutmeg, a Berry Compote laced with maple syrup and plenty of buttery goodness to give the bread a nice, caramelized finish and add an extra layer of flavor. Literally my version of heaven. It’s 100% going on the Mother’s Day Brunch Menu!

French Toast was always a mega-hit in our house growing up! It’s one of those meals that makes any holiday weekend extra special, and this Caramelized French Toast with a Berry Compote is truly perfection. Here’s the situation! First you need the amazing  Land O Lakes® Butter with Olive Oil & Sea Salt!! You might be thinking…. Olive Oil & Sea Salt in your French Toast? Hell, yes. It adds so much extra flavor and makes the perfect caramelized bread. You’re also going to need fresh berries. I used raspberries and blueberries but if you want to add strawberries, blackberries or pitted cherries… be my guest! All that’s left is to toast off some THICK slices of country bread and you are in business for a lovely, leisurely weekend brunch at home. 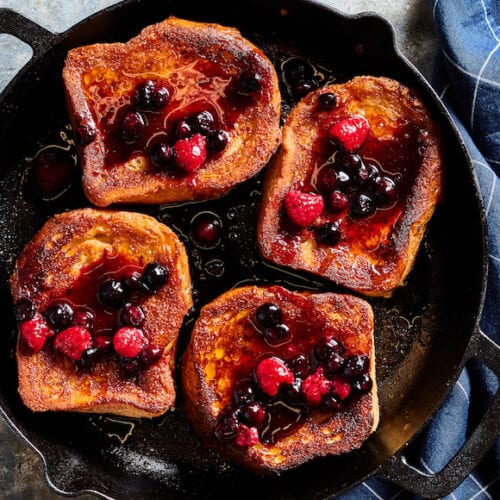 For the Berry Compote

This post is brought to you by Land O Lakes®. All content, ideas, and words are my own. Thanks for supporting the sponsors that allow me to create new and special content like this for What’s Gaby Cooking*